Struggling to engage your students with maths? Think outside the box...

Struggling to engage your students with maths? Think outside the box…

Following the Power of Maths roundtable on tackling maths anxiety, Dr Tom Crawford shares his take on the out-of-the-box approaches to help engage young people in maths. “Maths is boring, serious and irrelevant to everyday life…” …at least according to the results of my survey... 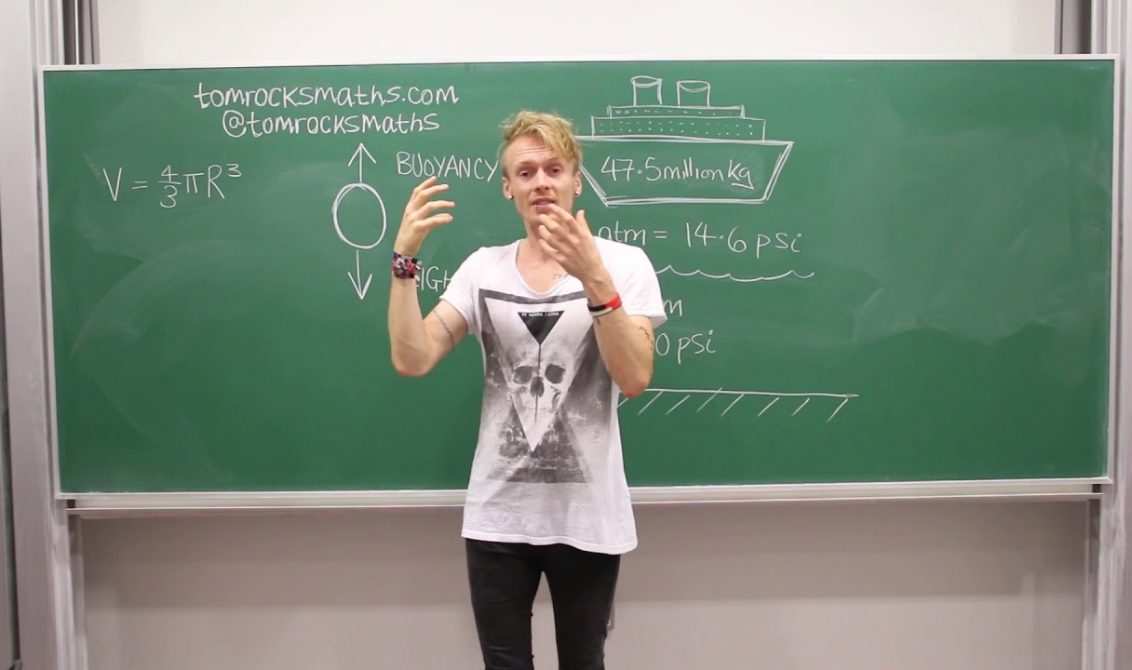 “Maths is boring, serious and irrelevant to everyday life…”

…at least according to the results of my survey amongst friends, students and colleagues working in education. This isn’t necessarily something new, but it does highlight one of the current issues facing maths education: how do we improve its image amongst society in general? In my work at ‘Tom Rocks Maths’, my approach is simple: improve the image of maths by combating each of the three issues identified above, and do it as creatively as possible…

Due to the extensive curriculum, teachers don’t always have the time to explore topics in detail, and in many cases, resort to providing a list of equations or formulae that need to be memorised for an exam.

My attempted solution is to do the hard work for them by creating curiosity-driven videos that explain mathematical concepts in exciting and original ways.

Take the example of Archimedes’ Principle: a concept that explains why some objects are able to float whilst others sink – a key part of the secondary school curriculum. It’s perhaps not the most engaging topic for teenagers with no interest in weight regulations for maritime vehicles. But, if instead the topic were presented as part of a video answering the question ‘how many ping-pong balls would it take to raise the Titanic from the ocean floor?’ then maybe we can grab their attention.

Generating curiosity-driven questions such as these is not always easy, but the core concept is to present the topic as part of the answer to an interesting question that your audience simply has to know the answer to.

When teaching my second-year undergraduate students about Stokes’ Law for the terminal velocity of an object falling through a fluid, we discuss the question ‘how long would it take for Usain Bolt to sink to the bottom of the ocean?’ – something I think almost everyone wants to know the answer to! (Don’t worry you can watch the video to find out.)

Of all of the issues facing maths in society at the moment, this is perhaps the one that annoys me the most. The majority of people that I speak to who don’t like maths will tell me that it’s the ‘language of the universe’ and can be used to describe pretty much anything, but yet they almost always go on to say how they stopped trying to engage with it because it simply doesn’t apply to them. This is what we mathematicians call a contradiction.

To try to tackle this issue, I go out of my way to present as large a range of topics as possible from a mathematical viewpoint. This has seen me discuss the maths of dinosaurs, the maths of Pokémon and the maths of sport to name but a few.

Throughout 2018, my weekly ‘Funbers’ series with BBC radio examined the ‘fun facts about numbers that you didn’t realise you’ve secretly always wanted to know’, where each week a new number would be discussed alongside an assortment of relevant facts from history, religion and popular culture. When working with the BBC, I was very insistent that the programmes were introduced as a ‘maths series’ to help listeners to make the connection between maths and everyday life.

3. Tackling “maths is too serious”

At first this surprised me. I’d never personally thought of my subject as ‘serious’ and speaking to my friends and colleagues, they seemed equally perplexed. But then it hit me. Looking at maths and mathematicians from the outside, where you cannot understand the intricate details and beautiful patterns, calling the subject ‘serious’ is a very valid response. There are endless rules and regulations that must be followed for the work to make sense, and most people working in the field can come across as antisocial or introverted to an outsider, which is where I come in.

To try to show that maths isn’t as serious as many people believe, and just to have some plain old fun, I created my persona as the ‘Naked Mathematician’. This began with the ‘Equations Stripped’ video series on YouTube, where I strip-back some of the most important equations in maths layer by layer, whilst also removing an item of my clothing at each step until I remain in just my underwear. As well as providing an element of humour to the videos (as no mention is made of the increasing lack of clothing), the idea is that by doing maths in my underwear it shows that it does not have to be taken as seriously as many people believe.

I have also seen an added benefit of this approach in attracting a new audience that otherwise may not have had any interest in learning maths – from my perspective I really don’t care why people are engaging with the subject, so long as they have a good experience which they will now associate with mathematics.

Whilst I am aware that my approach to tackling the issues faced by mathematics in society may not be to everyone’s tastes, our current methods of trying to engage people with maths are not working, so isn’t it about time we tried thinking outside of the box?

This piece was first published on the Pearson Schools Blog on September 17th 2019.

How to protect your students from cyberbullying
Next