The “Multilingual success in your school” competition closed on the 6 May 2019, with 25 entries from all corners of the world. Thank you to our community members who were so generous in sharing their experiences. There were so many inspiring ideas and we were... 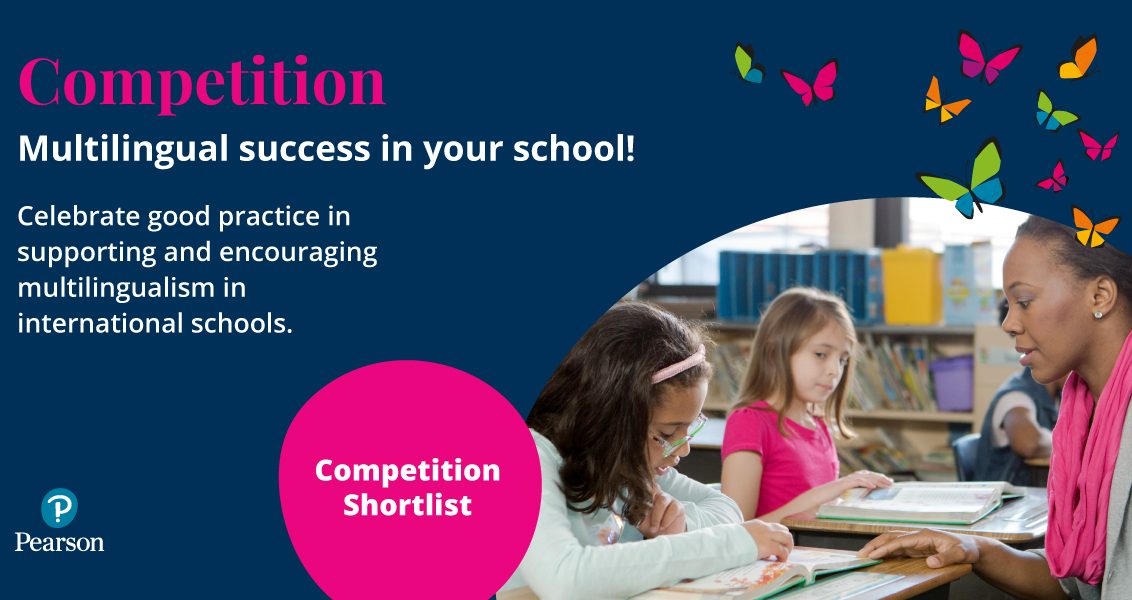 The “Multilingual success in your school” competition closed on the 6 May 2019, with 25 entries from all corners of the world.

Thank you to our community members who were so generous in sharing their experiences. There were so many inspiring ideas and we were very impressed by your passion for encouraging multilingualism in your schools!

After deliberation, we have shortlisted 10 fantastic entries. Read more about each of the initiatives below – we hope you enjoy them and they inspire you to try them out in your schools.

“The idea of the bilingual debate is the same as any debate, but the only difference that each team (i.e. opposition and preposition) have at least 2 students speaking the same languages and it is okay to speak in different terms allowing the team members to translate back-and-forth for each other, also there is a part where the students collaborate with their parents to ask questions and answering questions in different languages. The students therefore learn to compare resources and note the difference, for example Wikipedia, and talk about it in the debate itself showing the students the importance of multilingualism. The impact the initiative is on 2 levels: – Direct: the students who participated in the activity realized the importance of developing languages in a scientific way (the students who participated until this moment from iLower secondary are 400 students throughout the academic year) -Indirect: the students “paid it forward” to students who have difficulties learning a second language with PASSION. The low-skilled students are now enthusiastic to continue the journey of learning languages with motivation, dedication, and devotion.” – Khattab Abdullah

2. Àgora Lledó International School in Spain – Knowing the past to understand the future project

“The activity that we carried out to encourage multilingualism consists of making a mural about different aspects of the civil war and Francoism using the different languages present in the classroom which are English, Spanish, Valencià, German, Romanian and Russian. Students had to investigate aspects of the civil war such as the shelters, the ration cards, the post-war and the two sides of the war, with the objective of knowing real stories and testimonies and sharing them later with the rest of their classmates.” – Marta Ripolles

“Each grade level chose a multicultural theme, however, the essential questions and concepts were the same. The guiding questions for all included: What does the word international mean? What makes us an international school? What sorts of things make us different from each other? In what ways are we united?What is your cultural identity? What helps you understand this? Each grade level then studied the following themes in a 4-6week unit: grade 5: Human Rights, Grade 4 World Religions, Grade 3 The Importance of Our Names, Grade 2 Music and Games from Around the World, Grade Kindergarten and 1 My Identity. All grades agreed to have at least one dual language activity and at least one multi-lingual bulletin board.Teachers were encouraged to use interlingual teaching. There was a culminating day and the end of the unit that began with a multi-lingual assembly led by the ELL teachers. The students then spent the rest of the day visiting each others’ classrooms to learn from one another.” – Aimee Fenneman

“Following the recent influx of Chinese students combined with the increasing number of ELLs, we sought to create an event that would provide multiple opportunities for learning and sharing ideas and talents, while fostering respect for each other’s and our host country’s languages, histories and cultures. Our Chinese teacher, Ms. Wang, shared her inspiration to create such an event early in the school year with Ms. Gaki, middle school social studies and EFL/ESL teacher, and me, high school ESL teacher. With the support of our Administration and enthusiasm of our students, we facilitated a one-hour stage performance accompanied by an exhibition of student projects and artwork. The event was arranged for February to combine celebrating the Chinese New Year. In the first semester, students of Chinese, both native and non-native, and ELLs taking social studies in the middle school were assigned to demonstrate their critical thinking through projects comparing and contrasting Chinese historical facts, figures and philosophies to Greek ones using the English and Chinese languages. A Chinese play similar to Romeo and Juliet was enacted in Chinese and given English subtitles. The stage performance also included a variety of presentations comparing Greek and Chinese historical developments and leaders, approaches to mathematics, philosophies, calligraphy, and music, presented by pairs of narrators in Greek and Chinese. A traditional Chinese dance performed by a diverse group of students was among the highlights of the festival. Students who were not performing or presenting took on other roles they were interested in, including audiovisual and back-stage support, creation of promotional materials, exhibit set-up and volunteering at the table serving traditional Chinese snacks. Students had the first semester to collaborate and prepare for the event. The projects they either undertook or peer reviewed enabled students to recognize the diversity of the featured Chinese and Greek cultures and accept culture and language different from their own with an international mind and global citizenship. The Student Cultural Diversity Festival was a presentation of multicultural awareness and multilingual learning presented to peers, families, faculty and the community after school in our theater. It was presented a second time during Middle School Advisory block due to popular demand.” – Angela Zamanis

“The aim of the activity was to raise the profile of languages and support multilingualism in the school. It also allowed for students to understand and appreciate the diversity of spoken languages amongst their fellow students, to challenge themselves and to develop their interest in language learning. The students were selected on a volunteer basis but were all confident in both their mother-tongue and English. They planned lessons, resources and plenaries so that students were engaged and made progress. They taught the target language using visuals and the spoken word, for example, students were taught the articulation and nuances of accent and pronunciation in languages such as Russian, Portuguese, Urdu, Chinese Mandarin, and Afrikaans to name but a few. The student-led lessons took place on Hartland’s International Day, which is a celebration of the school community’s various countries of origin, cultures and languages. The activity took place across the whole school, from Foundation Stage through to Year 9. A whole morning was dedicated to this on International Day and has been followed by enrichment activities after school which has also encouraged continuing participation in this initiative. Other activities stemming from the student-led teaching have included a multi-lingual spelling bee competition and parent Arabic lessons. Parents were also involved in assisting in the lesson planning of the students.” – Melody Fisher

6. English School of Budapest in Hungary – Activity to promote multilingualism

“On a post-it note the students had to secretly write down the name of 2 body parts in their home language. They had to use their Home script (Mandarin, Macedonian) to write the words and write a phonetic pronunciation of the word in English. Then, the students gave me their words and I mixed them up. The students then collaboratively had to group the words together into language families (German, Mandarin, Macedonian and Scots). We then had a call and response session where each individual pronounced the words in their home language and the rest of the class responded. Finally I had an image of a body on the board. The students had to choose a word, say it aloud, and guess which body part it could be by sticking it to the skeleton. We then checked to see if any of our guesses were right and we had a plenary discussion about why it’s important to bring our home languages into the classroom.” – Rachel McKinnon

“From 18th to 22nd February this year we had Languages week at BIST. There were special language lessons provided by bilingual teachers from around the school: Japanese, Farsi, Welsh, and Xhosa. We held special language-themed assemblies celebrating the languages spoken in our school and untranslatable words from those languages. On International Mother Tongue Day on the 21st we held a mother tongue buddy reading event. All the children were grouped by their native language and read books (or were read to) in their native languages. The books were furnished by families, staff, and the school library. We had books in Farsi, Turkish, Georgian, Japanese, Korean, Spanish, Chinese, Swedish, Czech, Polish, German, Danish, English, Dutch, Romanian, Arabic, Russian, and Armenian.” – Naeemah Rose

“The homeroom second graders and myself (the EAL support teacher) designed an end of unit assessment task and rubric relating to their current PYP Unit of Inquiry with the central idea: “Family histories connect people to cultural and personal identity through meaningful inherited information.” Each student was to bring in a family artifact of their choice (old or new) and describe the artifact using a visible thinking routine called “Layers”. This routine asks the students to describe objects according to emotional, cultural and symbolic significance to name a few. Their performance task was to record an oral presentation of their descriptions to be posted online and shared with parents. We enlisted 18 secondary students whose home languages corresponded with the 15 home languages in our second grade to guide the students through the task in their home language and assess them.” – Simon Johnson

“Parents joined their children in the school library for a light breakfast and to read a book in their mother tongue together. Parents either brought a book from home or borrowed one from our mother tongue collection. Parents also enjoyed a short presentation about the importance of sustaining and growing their children’s mother tongue.”  – Brad Waugh

“Pupils, parents and teachers from across the school community undertook research to specific strands of the local community and produced images with Arabic and English subtitles, using the green screen. The display of greetings was developed over numerous collapsed timetable days to welcome visitors to the school.”  – Clare Boyes

These 10 shortlisted competition entries were judged by Dr Patricia Mertin, an enthusiastic educator who refers to herself as a ‘reformed monolingual’. Her special area of interest is developing effective teaching methods to achieve successful learning, in particular for second language students in international schools. She co-authored Pearson’s IB DP English B title.

See more from the languages series:

Promoting home language use: How do we make a difference?
Ideas for celebrating International Mother Language Day in your class
Input matters: supporting children’s harmonious bilingual development
Is there a potential pandemic of language loss in international schools?

Dealing with bullies at school: A psychologist’s viewpoint
Next